Although the 2019 C10 nationals were just held on May 3-4, Hedman’s journey to the Lone Star State for the 2nd annual, All-Chevy Truck event began way back in October of last year, when the guys at Classic Trucks Magazine approached us to help with the construction of an awesome 1972 C10 truck. LMC Truck and the C10 nationals were building a truck to be given away to one lucky person at the show, and Classic trucks was going to build it as part of their Week-To-Wicked series. Since Hedman has the best header coverage in the industry for Chevy pickups, we jumped at the opportunity to help out. We’ve got links to Classic Trucks Magazine’s full truck build video, as well as their written build articles, later in this post.

Fast forward seven months, and the time has come. We take-off from John Wayne Airport in Southern California, bound for DFW, in the heart of Texas. It was a pleasant flight, but all we could think about was the bleak news we were hearing, for days, about the stormy weather that was expected . Was the drizzle we were getting, as we left “sunny” California a sign of things to come?

During our final descent into Dallas, we flew over the Texas Motor Speedway, which is where the 2nd annual LMC C10 Nationals was being held. We could swear our advance support team, Jason and Matt, were waving at us from the track.

A SOGGY DAY FOR SETUP

With a wet and rainy forecast leading up to the event, we were glad this down pour during set-up, and a brief shower Friday afternoon, was all the foul weather we encountered all weekend.

When we got to the track on Thursday, Mother Nature thought she’d mess with us, and make things a little soggy for set up. We were originally going to set up outdoors, next the good folks at TCI Engineering (Total Cost Involved), but with the stiff winds that were blowing, and down pour of rain, we decided to move it inside, and set up our display in the pit building.

Finally, Friday morning came, and day one of the 2 day event was here. There were a few heavy down pours the night before, but the Texas Motor Speedway grounds seem to dry out super fast. By show time, all that remained were puddles here and there, which actually made for some cool photographs. Aside from a late afternoon shower, which we encountered during the Facebook Live video with Todd and his #HedmanEquipped, LS powered square body (video below). Fortunately, this was the last we would see of the rain during the awesome event, and there was no shortage of Chevy trucks, spectators, or fun things to do– As can be seen in our photos.

There was lots to do at the event, even if that something was doing nothing with friends and family.

GIVEAWAY DRAWING FOR THE WEEK-TO-WICKED C10

One of the main draws to this event has to be the truck that the event gives away to one lucky spectator or truck owner, at the show. To win, you have to be present at the drawing, which takes place at the very end of the event, as one unlucky gentleman found out first hand.

You had to be present to win, so naturally, the crowd was huge for the drawing of the 2019 C10 Nationals Giveaway C10

The first name was called, and a murmur could be heard from the huge crowd that was on-hand, as there was no reply from the audience. A count down commenced, and when the countdown reached zero, a second name was pulled from the basket. There was a silence after the second name was called out. Could this person also miss out on the win of a lifetime? Fortunately for Texas’ own Robert Gerbig, he snapped out of the state of shock he was in, in time to make his way to the stage to accept his “brand new”, 1972 Chevy C10. Check out our Facebook live coverage of the drawing for the LMC C10 above.

Robert Gerbig, winner of the 1972 C10 Nationals giveaway truck starts it for the first time.

When talking to George afterwards, he admitted that he thought he was hearing things. George is more than just a casual fan of trucks. He admitted, that he already had 6 trucks and just finished building one. That was going to be his main truck, but with the winning of Hot Rod Magazine’s Week-To-Wicked built C10, he thinks the truck project he recently completed will be going to his son. Here is the short interview we had with George, after he had a few minutes to let it all soak in and check out his bitchin’ truck.

The techs at Classic Trucks Magazine wanted the Week-To-Wicked C10’s Big Block to breathe through a pair of Hedman’s 69120 series long tube headers. They fit the truck perfectly, and a slam-dunk, had the C10 been closer to a stock-hieght set-up. With the LMC C10 being significantly lower than a factory truck, the long tubes hung too low for our taste. You can see this in the videos Hot Rod and Classic Trucks posted during the 5 day build process. In the end, wiser heads prevailed, and they opted for a pair of our big tube 69170 series mid-length headers. Our 69176 HTC polished-silver ceramic coated model, to be exact.

The large 1-3/4″ tubes will flow plenty of exhaust to give Robert’s truck loads of low-end torque, making it much more enjoyable to drive on the street. In addition to being larger, the ports on this header are also square, which was important to this particular build. The BB Chevy engine Gandrud Chevrolet provided for the C10 Nats sweepstakes truck was a GM ZZ502 engine. The heads used on this crate engine are D shaped, and using a smaller, or round port header would have resulted in exhaust leaks at the bottom of the port, where they are squared off. The square port design of the headers installed on the Week-To-Wicked C10 build fully cover the ZZ502’s Big D-shaped exhaust ports.

As part of our C10 Nationals experience, we had a giveaway of our own. We gave away two sets of headers from Hedman Hedders. One set was awarded to a winner who registered in our booth at the show, and another set was awarded to online fans of our Facebook and Instagram pages. We held the drawing live on Facebook the Monday after the show to determine the winners. The online winner was Lance White, and our winner chosen from those who registered in our booth at the show is, Thomas Dishman. Congratulations to all our Grand Prize winners and runners-up. Thank you to everyone for playing.

There were about 1000 Chevy / GMC trucks and SUVs on hand at the C10 Nationals, and I think we took a look at every one of them. Styles varied widely, from six-figure trailer queens, to every day drivers that still have original paint and patina. We love trucks that are old or new, stock or highly modified. If its got four wheels and an engine, we dig it. While we couldn’t post all of the photos we shot of trucks at the show, we have included a cool cross-section of Hedman-Equipped trucks from this year’s C10 Nationals.

We hope you enjoy this post and gallery of photos. We hope to make it back for the 2020 edition of the LMC C10 Nationals at Texas Motor Speedway. Until then, if you need help with your Chevy truck project, or daily driver, check out our hedman.com, or call our live-person tech team in Whittier, California. 562.921.0404 8a-4:30p PST M-F, and we’ll be glad to answer your questions. Up at midnight and have a question that can’t wait? email us at Gearheads@hedman.com. If you run Hedman Hedders, tag your car or truck photos on Instagram and FaceBook with the hashtag #HedmanEquipped.

Here’s a very well-kept, near-stock appearing 1978 Chevy C10, but powered by a SB Chevy with Vortec-style heads, and fitted with a pair of Hedman’s 69890 Elite Long Tube, Chevy Truck Headers.

A clean, early ’80s Silverado with a 383 stroker motor that breathes through a pair of Hedman’s Mid-length headers with HTC silver ceramic finish.

The C10 Nationals had a good sized autocross track set up at the show, and Trevor was amped up about giving it a shot in his ’83 Silverado, and he let us tag along with our GoPro. Check out this video of the young man autocrossing for the first time. Clearly he likes it.

For the second year in a row, the Huntington Beach Holiday Toy Drive & Car Show invaded Four Sons Brewing for a fun filled day of Hot Rod’s and holiday cheer. Despite a weather forecast that threatened to dampen this year’s Toy Drive and Car Show, Saturday turned out to the perfect southern California sunny day, and ideal weather for the classic car owners and enthusiasts who came out to enjoy the day’s activities.

Friends and family started showing up early, and most everyone hung out for the entire event. Throughout the day, participants and spectators were treated to more than 60 classic cars, live pinstriping by Von Hot Rod, a parts raffle, local food and craft beer, an engine building competition by the Hot Rodders of Tomorrow, and so much more. Let’s take a look back at this great event. 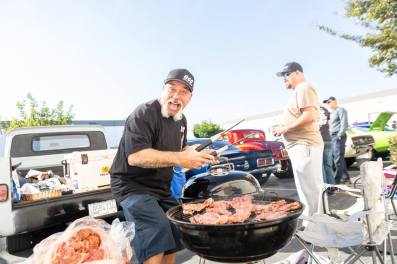 Grill Master Steven Migliore and his son prepared some tacos for all to enjoy.

This was Mr. and Mrs. Dave Muro’s first show with their Ruby & Pearl 1956 Chevy Belair. It was built by RMD Garage, and it is immaculate. Beautiful car!

Thomas H. Raber, A.K.A. Gator is nothing but smiles!

Pop’s 1972 C10 was looking extra festive with it’s grill wreath. This truck’s engine was part of an #AutoRevolution build project, and is loaded with Trans-Dapt products and some Hedman Hedders. Thanks for coming out to the show and surprising us with a customized skateboard deck for the raffle! #HedmanEquipped 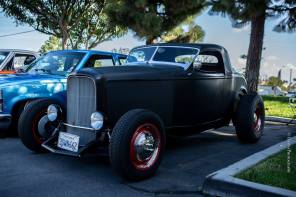 END_OF_DOCUMENT_TOKEN_TO_BE_REPLACED

“If you’re a header manufacturer, what better way to test and publicize your products than to run them on your own out of sight Pro Stocker,” read an article published in the February 1972 issue of HOT ROD Magazine.

The first Hedman Hedders Pro Stock Ford Maverick, campaigned by Kenny & Dick Hedman, was stolen the night of a big magazine awards banquet held at the end of the 1970 Indy Nationals. The motor was eventually found in a haystack in Greenfield, Indiana, but the body and chassis vanished into thin air, never to be seen again. Kenny Hedman, who is the son of Hedman Hedders founder Bob Hedman, would not let this setback end the team’s racing story, or hamper Hedman’s real-world product development. Kenny, Dick (Kenny’s brother), and the rest of the guys got to work on their next-generation race car— And the new “Hedman Husler” Maverick was reborn into Pro Stock competition.

Starting from the ground up, the Hedman brothers saw this as an opportunity to integrate what they learned from the first car into the new build. END_OF_DOCUMENT_TOKEN_TO_BE_REPLACED